The summer of 2007 was spent showing people around the exhibition, working in the fibre room on the felting machine or sewing machines, or in the wood workshops making new stretchers with Bob.

I had persuaded him to start making smaller stretchers, as the large ones were difficult to fit into our house and so, when the exhibition was finished, the paintings were stored in our joint studio at Cow Lane in Salford.  The studio was an odd shape, so that only one person could paint in it at any one time.   Together with the extra paintings, the room was even smaller.  Eventually, we were using the whole of the  studio as storage space, as Bob was working constantly on his paintings at Irwell Valley Studios.

Unfortunately, when we had first moved into Cow Lane, we had been offered a very badly maintained studio, which was without a door, so that anyone could walk in and move things about.   It was also shared with another artist.  One time we found Bob’s work had been pushed to the outer wall  and the rain had damaged quite a few of the paintings from his first degree,  so he was quite annoyed.

Apart from the mildew, everything was going fine.  I needed to earn some money, so I took on some part-time English tutoring with some girls from Seoul.  Their housemother was obsessed with Oxford, so we used take the girls and their Korean teacher on day trips, usually to Oxford!  Sometimes we went to stately homes, where we enjoyed mashed potato sandwiches, a Korean delicacy.   Bob was not amused!

The next event in the pipeline was his dissertation.  He had already written the first half of it in the first year of the M.A.,  and the second half was due in the second year.  His final exhibition was to be held in Spring of 2008,  By this time I had finished my degree and had sold one collage from my show to a student  for his mother’s birthday.

We had both taken part in an art auction the year before in aid of the degree show expenses, and in another auction, I had bought a copper sculpture and the proceeds of this auction which had been organised by a student, went to a cancer charity.

I had also started my M.A. in  Contemporary Fine Art and was still supporting Bob in his.  In fact, we were supporting each other!

Bob attended a number of meetings to discuss his final show and it was, as usual, a struggle to get an equal share in the gallery space.  Quite often, dealing with artists’ egos is a problem which manifests itself in the huge amount of space which they require for their work.

The other artist was a lovely guy, but there was a language barrier, so it was difficult to make him understand that he shouldn’t take over the whole of the gallery space,  even though Bob only  needed wall space,  the viewers would want to walk around to look at the paintings.

The other artist made paintings, sculptures, media, almost everything you can think of,  and the final exhibition of the two, including Bob’s paintings was really good.  As usual, we made brochures listing all the works.  His co-exhibitor, who had been away for weeks before the show, thought, at the last minute that he would do the same.  Both artists did very well in their finals.

After the exhibition, all the students had to talk about their work and so I drove us to the gallery in good time, but I was informed by phone that the Korean girls wanted to see Bob’s work and that I should wait for them outside the gallery, as they didn’t know the way, etc.  So I waited outside in the rain, only to find that they had already gone inside.  Also, they had a young child with them,  my boss’s daughter, so I felt that, rather than have her disrupt the talks, which were being assessed and filmed, I had better keep her occupied with a drink and a snack.  So, in the end, I missed Bob’s talk, which was a great shame.

Bob was really happy when the tutors of the course shook his hand and congratulated him.  I had to tell him that he was now their equal, in qualifications, at least.  He was very impressed with that thought!

Some of the paintings from the M.A. exhibition. 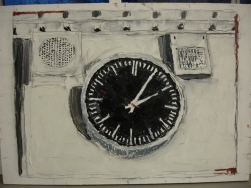